Central Queensland contains substantial coal and gas reserves. The Bowen Basin supplies most of Queensland’s hard coking coal and the overlying Surat Basin has large thermal coal resources. Approximately 45 coal mines (both underground and open cut) are currently operating, most in the Isaac-Connors catchment around the Moranbah/ Middlemount/ Blackwater area, and in the Lower Dawson catchment around Moura. The resource sector is a significant direct employer and generates significant indirect regional employment. In recent years falling coal prices have reduced profitability in the region, which has caused many mines to scale back employment and a small number of mines to close.

Historical mining of gold and copper at Mount Morgan has left a legacy of acid mine drainage that continues to affect the Dee River. Acid mine drainage occurs when sulfide minerals are exposed to air. The minerals are oxidised, producing acid leachate high in metals. Acid mine drainage leaches into the old mine pit and from piles of waste rock at the site. Long sections (20–50km) of the Dee River downstream of the mine site are affected, with acidic water that has high metal concentrations reducing biodiversity in the river. These impacts are reduced downstream by inflows of freshwater from other catchment areas.

There is a magnesite mine at Kunwarara, north of Rockhampton. Small-scale gem mining (mostly for sapphires) occurs in the Gemfields west of Emerald, and semi-precious chrysoprase is mined near Marlborough. There are limestone and nickel mines operating in the Fitzroy Basin as well as several quarries. 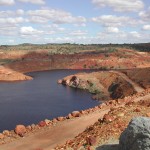 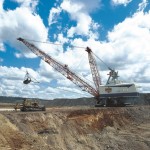 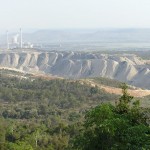 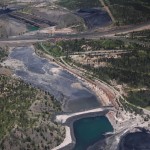 Aerial view of Central Highlands Mine