What is Fitzroy Partnership for River Health?

The Partnership is a collective of government, agriculture, resources, industry, research and community interests across the Fitzroy Basin in central Queensland.

Partners have a common goal of providing a more complete picture on river health and support this goal by providing funding, resources and contributing water quality and ecosystem health monitoring data through data-sharing arrangements.

How does the Partnership ensure aquatic ecosystems are maintained?

While not directly involved in river management, report card results are designed to inform consideration of whether current management strategies are proving successful in maintaining the health of aquatic ecosystems. Please see our role of partnership diagram to understand our role in informing better river and catchment management.

The report cards will also help guide and improve a range of regional plans, such as the Central Queensland Sustainability Strategy and potentially guide investments towards improved aquatic ecosystem health by governments and all partner organisations.

What are the benefits for the community?

The community will benefit through access to accurate water quality and ecosystem health information, presented in a way that is understandable by all. In November 2014, the first Drinking Water Reports were released for Rockhampton and the Central Highlands, to complement the Report Card results grading the health of the rivers in the Fitzroy Basin. A grades were received for all townships tested, with in-depth data provided in our Drinking Water Reports section. Again in 2017-18 A grades were received for all townships in Rockhampton and Central Highlands, with some aesthetic exceptions evident.

What are the benefits for Partners?

We’ve asked our Partners to let us know why they are involved in the Partnership and the value they gain from being involved.  To understand the many reasons our Partners came on board this strong collective, Major Partner Peabody Energy lists why they joined in 2012 – click here – and Partner CQG Consulting outlines a different perspective for joining – click here.

Partners have a common goal of providing a more complete picture of river health.  They support this goal by providing funding, resources and contributing water quality and ecosystem health monitoring data through data-sharing arrangements. This data is used to complete annual report cards on the health of Fitzroy Basin waterways.

Join us to share in our future success, as we strive to achieve a more complete picture of river health, for the Fitzroy Basin. 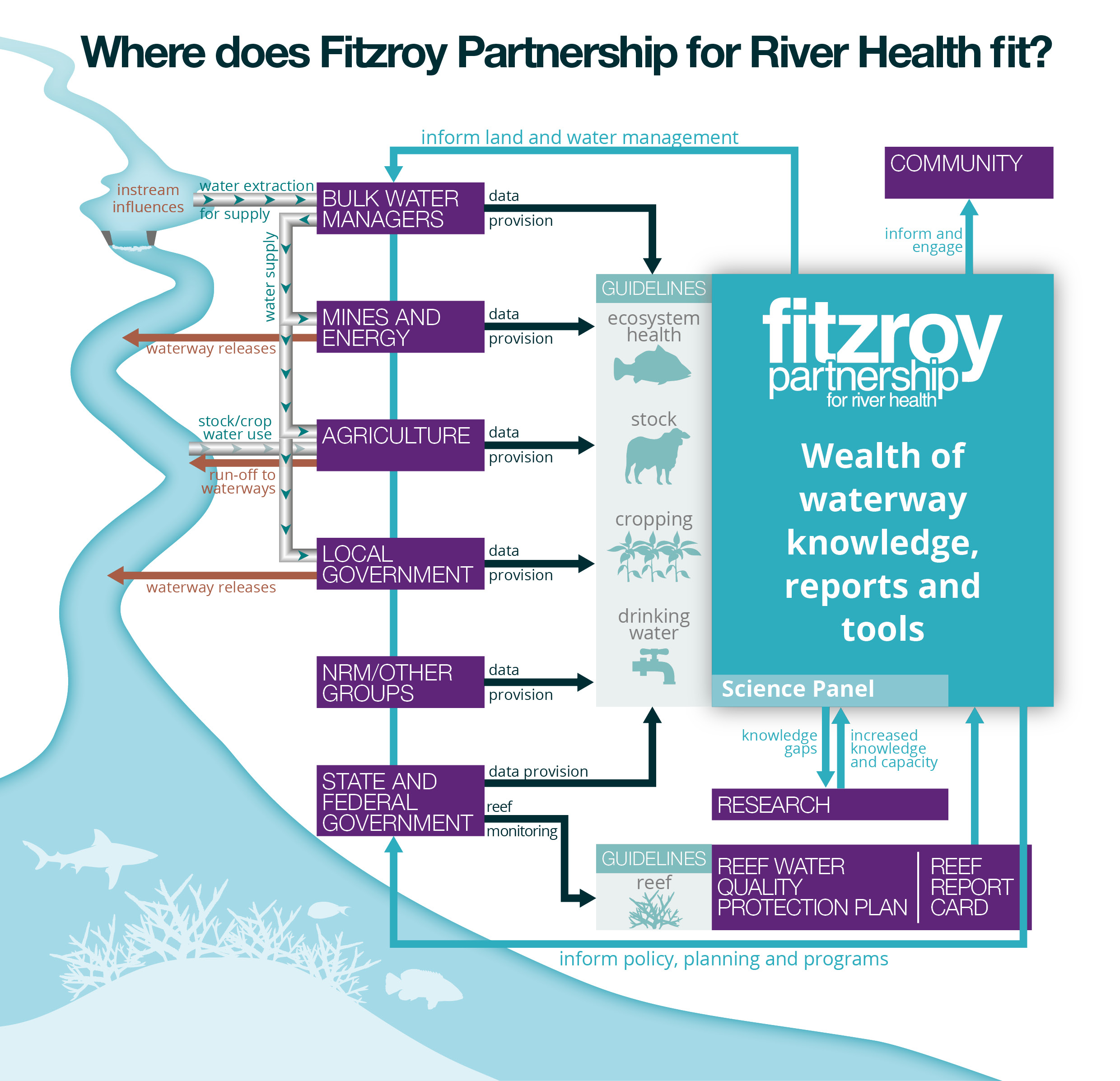 The Hart report prepared following the 2008 floods and a subsequent cumulative impact assessment study both highlighted the need for an integrated monitoring and reporting system for water quality in the Fitzroy Basin.

Many organisations had already been advocating for the establishment of such a monitoring system, including Fitzroy Basin Association Incorporated (FBA), which recommended this action through its Fitzroy Basin Water Quality Improvement Report. Driven by the association, relevant monitoring organisations were approached and asked to form an alliance to address the lack of a cohesive monitoring program.

The benefits of sharing data and the desire to provide clear information in light of growing public concern led many organisations to sign on to the initiative.

Building on other successful approaches

Our partnership has drawn on aspects of established monitoring initiatives such as the South East Queensland Healthy Waterways Partnership and the Reef Water Quality Protection Plan Reporting, which have proven successful in providing access to larger pools of data and better information to guide management and policy decisions.

However, given that the Fitzroy Basin is a different system with a diversity of organisations with a stake in waterway health, our partnership is different and called for its own unique approach. With this in mind the Fitzroy Partnership for River Health implemented an innovative approach tailored to our unique set of needs and opportunities with the vision of delivering a world class integrated waterway health monitoring and reporting program.

Our partnership was formed in 2011 and was the second of its kind in Queensland, and the first outside of south east Queensland (SEQ). Today in Queensland there are now five report cards up and down the coast reporting on the health of waterways that drain into the Great Barrier Reef, as well as the SEQ report card. We are proud to have supported some of these with the establishment and ongoing maintenance of their online reporting tools. We also developed the Reef Reporting tool which is used to share information on Reef Water Quality.

The five Reef Report Cards are as follows:

Another report card is the Reef Water Quality Protection Plan Report Card. The Reef Plan Report Card covers all the Great Barrier Reef regions and the Great Barrier Reef World Heritage Area itself. While it includes the Fitzroy Basin, it is different to the Fitzroy Partnership Report Card as it focuses solely on the impact of diffuse source pollution from broadscale agriculture on the reef and directly measures progress towards the Reef Plan goals and targets.

There are a diverse range of organisations currently involved in monitoring or interested in understanding the health of Fitzroy Basin‘s waterways.

The role of the Management Committee is to provide strategic oversight and direction to the activities.

Agreement signed by participating members. Sets out Partnership governance and operation. A copy is available Here.

A five-year strategic plan for the Partnership has been developed and endorsed by the Management Committee, and can be found here.

FBA is the current Host Organisation of the Fitzroy Partnership for River Health.