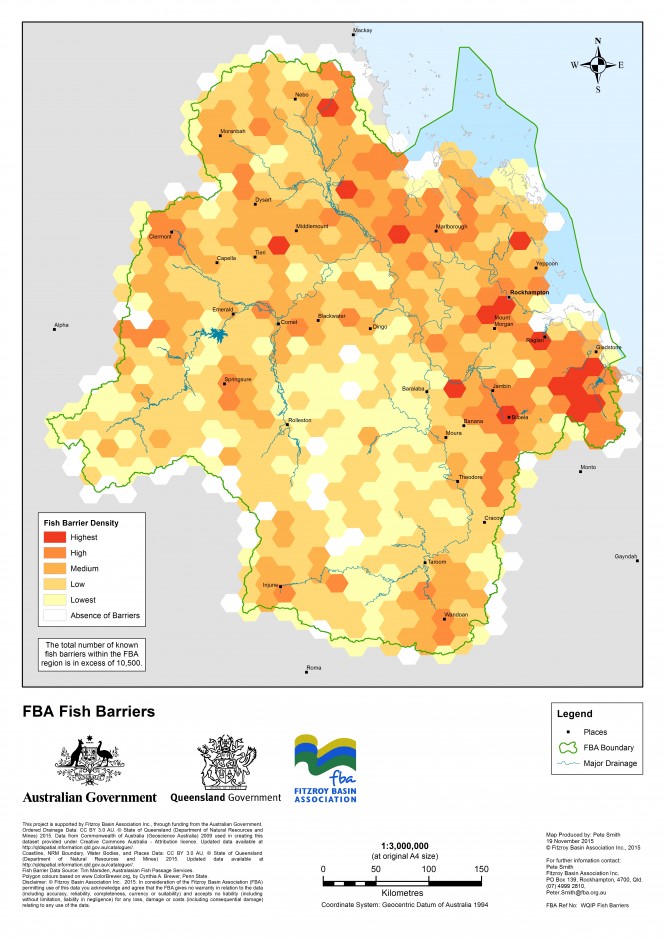 The free movement of fish through river systems is of great importance in the Fitzroy catchment.  There are 49 fish species that are found in freshwater streams of the Fitzroy River.  Almost half (23) of the species found in the Basin’s streams are diadromous (such as the iconic barramundi), requiring free access to estuarine or marine waters to successfully complete their life cycles. The remaining species complete their entire life cycle in freshwater, with a large proportion of these (23 species) undertaking significant migrations (such as the Fitzroy golden perch).  Fish migration between marine and freshwater habitats, and within freshwater habitats, is therefore a vital aspect of the life cycle of freshwater fishes of the Fitzroy Basin.

Barriers affect fish community condition by preventing movement of fish species that require free passage along river systems to fulfill a number of key life stage requirements. This movement is essential for:

Barriers preventing fish passage contribute to the loss of species diversity within fish communities, severely impacting the health of the Regions aquatic ecosystems and is one of the main impacts that humans have had on the Fitzroy Basin’s fish communities.

In 2008, FBA funded a project to identify barriers to fish passage.  The project conducted a desktop study and tested some of the findings to identify all potential barriers to fish passage in the Basin and prioritise these barriers for remediation. Barriers to fish passage included any structure that impeded the movement of fish, such as culverts, pipes, road crossings, weirs and dams. A map identifying barriers and locations of hot spots within the Fitzroy catchment can be viewed on the right. Over 10,000 barriers were identified and the map displays where most barriers are found. As part of the WQIP:2015, the 2008 prioritisation has been revised and updated.   Refer to this page here for more detail and the 46 priority fish barriers identified for remediation.