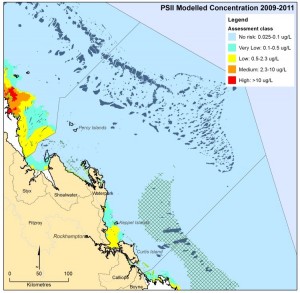 Photosystem-II inhibiting (PSII) herbicides are currently the main herbicides of concern in Reef ecosystems and concentrations have been detected in some parts of the Reef that are likely to cause negative effects in the freshwater, estuarine and marine environments.  A report commissioned as part of the WQIP:2015 suggests that the concentrations of PSII herbicides in the marine environment of the Fitzroy Region are not at a level likely to cause harm to the Reef environment. This is not to say that local freshwater environments are not being impacted upon, and best management practices in regards to application methodology and timing should continue to be encouraged.

The most common PSIIs used in the Fitzroy Region are atrazine (predominantly used in cropping) and tebuthiuron (predominantly used in grazing). As conservation tillage has increased and as improved management practices are implemented (shifting from high-risk to low-risk management in relation to sediments) there is an increased reliance on all herbicides for weed control. This results in a trade-off between minimal/zero tillage, which greatly reduces soil loss, and the increased reliance on herbicides, which result in the increased potential for losses into receiving waters.

At sufficiently high concentrations, PSIIs have a number of negative effects on corals, including reduction of photosynthesis in zooxanthellae, reduced fertilisation and metamorphosis, and by causing expulsion of zooxanthellae from coral; this can result in the loss of, or decrease in, health of coral colonies. Other marine organisms, including seagrass, mangroves and algae, are sensitive to the herbicides that are used for weed control on land. Herbicides are also known to cause death in a large variety of marine life, from invertebrates to fish and crustaceans. Increased levels of nitrogen and phosphorus in waterways also increases the effects of herbicides on marine life, demonstrating the need for integrated management of run-off in the Fitzroy to improve overall Reef health.

Furthermore, the impacts of herbicides contribute to the cumulative impacts of other stressors (e.g. fresh water flood plumes, elevated nutrients, impacts from cyclones, increasing sea surface temperatures) to increase the overall impact on organisms of the Reef.