The extreme rainfall of the 2010-2011 year flooded 45 of the 57 coal mines in the Bowen Basin, resulting in the loss of more than $2 Billion in coal export earnings. The release of salty water from flooded coal mines can pose environmental risks to downstream river systems. This case study reports stewardship actions taken by Anglo American’s Metallurgical Coal Business Unit to better manage risks associated with water management at their open cut coal mines. 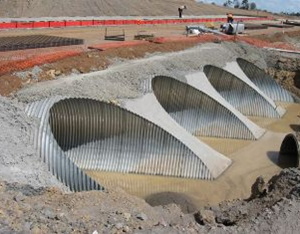 The highly variable climate of the Fitzroy region creates dual challenges for mine operators – lack of water in dry years and excess water in wet years. The ongoing expansion of coal mining in the region is driving more efficient onsite water management by coal mines.

Anglo American are adopting better forecasting of rainfall events, ‘real time’ monitoring of stream flows, integrated infrastructure systems to divert and/or store water and protect infrastructure, with detailed monitoring and better coordination between engineering and environmental teams to address the risks from too much or too little water.

Open cut coal mines use water for separating the coal, keeping the dust down, washing vehicles and drinking. Dust suppression is needed in pits, on roads and in the industrial area. In practice, there is a great deal of variation in the tasks to which ‘mine-affected water (water collected and used on site) is applied.

The expansion of coal mining in the Bowen Basin has increased competition for water. Significant investments have been made in infrastructure such as pipelines to provide additional water to mining regions. The extended drought from 2001 to 2007 increased the costs and reduced the supply of water to mine sites. This prompted efforts to improve water management onsite, particularly through more effective capture of rainfall and runoff.

Increasing water storage and re-use means that salinity (saltiness) of the water needs to be managed. Salt is derived from overlying materials that are brought to the surface during the mining process and exposed to rainfall. Mine pits can also intercept salty groundwater flows. Rainfall and runoff that collects and is held in mine pits deteriorates over time, getting saltier the longer it is held.

The drought broke in 2007-08, when minor floods occurred. In the following years there was above average rainfall, and 2010-2011 was an extremely wet year. This was associated with a switch from drought to flood regimes, reflecting the El Nino Southern Oscillation climate cycle. By February 2011, over 80% of the coal mines in the Bowen Basin had restricted operations due to excess water. Excess water can close roads, inundate pits, flood tailings dams, damage infrastructure and compromise safety. 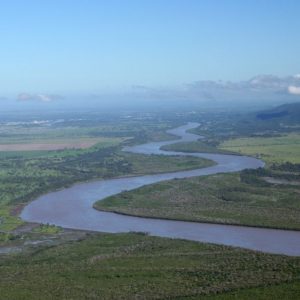 In 2008, levee failure at one mine resulted in the flooding, and subsequent (licensed) discharge of a large amount of salty mine water into the Nogoa River. Some downstream towns (Blackwater, Dysart, Middlemount) had poor quality drinking water (but no serious health effects). The salty water also caused problems for Stanwell Power Station. The impact on fish and other species in the river is not known, but it was likely that spawning of Golden Perch was affected. Following this incident, the Queensland Government made changes to the way that mines are licenced to discharge excess water.

In 2010-11, short-term permits were issued by the Queensland Government to allow companies to pump out excess water to adjacent streams and rivers. A certain amount of flow is needed in the streams to dilute the salty water when it is discharged from mine sites. Many of the Fitzroy’s rivers flow only part of the time (ephemeral streams) which limits the time that mines are able to discharge excess water (often only a matter of days after a rainfall event).

Mines are required to comply with their licence conditions (issued by the Queensland Government) that specify under what conditions they are allowed to pump out excess water to creeks. Licences also require mines to monitor water quality and flow upstream and downstream of the point where they discharge water.

This case study reports on actions taken by Anglo American’s Metallurgical Coal Business Unit to better manage the risks associated with too much, or not enough water. A major project has been implemented at Anglo American’s Capcoal complex (including Foxleigh) near Middlemount and Dawson Mine near Moura.

Anglo American have implemented the following strategies to realise these benefits:

The business case for Anglo American’s investment in better water management reflects the benefits in reducing the ‘down-time’ when mines have to be closed because of excess water. The environmental benefits of this approach include reducing the amount of flood waters that enter pits, the amount of time that excess water is in pits (water quality) and ensuring that when water is released, there is sufficient dilution of salty mine water with natural river flows to reduce the risks to river biota and downstream water users.

Anglo American and other coal producers in the region are increasingly recognising that proactive water management practices on mine sites can increase coal production and reduce the environmental risks from the release of salty water from flooded mines. Changing climate patterns will continue to challenge mines to anticipate and manage droughts and extreme rainfall events.